The role of outer hair cells is thought to amplify the movement of the basilar membrane, especially when the sound stimuli are low intensity. The keys to the function of outer hair cells as so-called cochlear amplifier are motor proteins found in their plasma membranes. One of these proteins may be prestin. 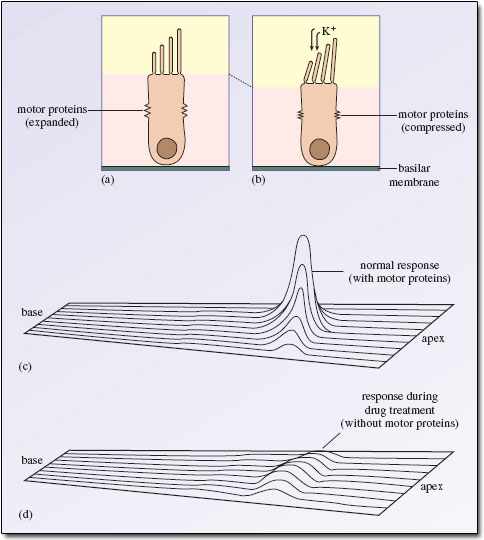 Figure 1: The role of outer hair cells in sound amplification. (a) Motor proteins in the plasma membranes of outer hair cells. (b) Bending of the stereocilia causes potassium ion influx, polarizing the hair cell and triggering motor proteins to shorten the cell length. (c) The shortening ( or lengthening) of the hair cell increases the deflection of the basilar membrane. (d) Drug treatment (eg. furosemide) reduces hair cell tranduction and thus the flexing of basilar membrane.

Image courtesy of http://openlearn.open.ac.uk/mod/resource/view.php?id=263164 under a Creative Commons licence.

The brain also sends efferent inputs to the outer hair cells through descending pathways to regulate the extent of sound amplification. This is thought to increase the signal-to-noise ratio.

Webnode, an innovative sitebuilder
Have a captivating website for free!
Get started